Have you ever wondered what meme data looks like?

We answered that question by looking at a dataset based on data from the "WeRateDogs" Twitter account. The dataset was created by Greg Baker, a Computing Science instructor at Simon Fraser University in British Columbia (BC). Greg's inspiration for the dataset came from an article written by journalist David Montgomery. 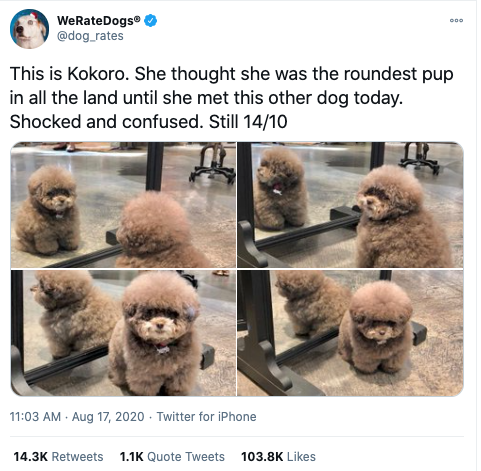 WeRateDogs shares and scores funny dog pictures. Usually the dogs end up with a score above 10/10 (take a look at the example WeRateDogs tweet to the right). This account is also credited for creating meme language you may know, like "doggo" and "pupper."

We wanted to figure out if the scores given to dog pictures on WeRateDogs were increasing over time.

To do this, we created a scatterplot using the dataset.

Reflect on what you see

Look and interact with the data visualization above. When you mouse-over the scatterplot, you’ll notice more information appears.

Think about the following questions:

Use the fill-in-the-blank prompts to summarize your thoughts:

Below are some  ways to share your thoughts about the data visualization. If you want to publish your reflections online, make sure you check in with your teacher or guardian.

Learn how we visualized the data

Go to our walk-through (in Jupyter notebook format) to see how we used the data science process (formulating a question, gathering the data, analyzing the data with code, and creating the visualizations) to create the scatterplot.